Learning the alphabet (or learning letters of the alphabet) is an important first step in the process of learning how to read. First, introduce letters to children so that later they can begin with reading and writing.

Children can start learning to read as early as preschool age. What is important here is a child’s motivation to learn and the ability to correctly pronounce all sounds in his or her mother tongue. These are important prerequisites for a learning letters, then learning to read, successfully. At preschool age, children learn mainly through visual, acoustic and tactile activities. Involving different channels of perception in the learning process raises its efficiency and facilitates good long-term memory of the letters learned.

Learning the ABCs: A Child's Introduction to the Alphabet

The first step in learning letters begins with individual letters. Learning to read always begins with the ability to recognise individual words. We denote sounds with letters. Words consist of various letters, and linking those letters to sounds. A child cannot learn to read without previous knowledge of the alphabet.

To master reading, a child needs to learn and recognise not only the graphic form of letters, but also be able to match them with their corresponding sounds. That means, a child should be able to write letters as well as pronounce them.

That is why parents and teachers should start with the alphabet wholistically - not just saying the 'names' of letters, but the 'sounds' each one makes as well (their pronunciation / articulation). When a child can correctly pronounce all sounds in his or her mother tongue and distinguish letters based on their visual form, you can move on to the next step in learning how to read. Normally, at the age of 5-6 most children have no difficulty managing it.

See related article: What to Expect when Your Bilingual Child Starts Learning to Read

At the age between 5 and 6 children come to realise that there is a great deal of information encoded in language by means of letters. So they are mostly keen on learning to read by then as they are curious by nature and open to new experiences.

Of course, toddlers can learn and memorise separate letters quite early, too. However, their interest is mostly spontaneous and is directed towards selected words and letters. Here, lack of motivation for continuous learning can often result in stress, resulting in toddlers not being motivated to learn letters at all.

Both parents and educators should clearly understand their goals in learning letters. It makes sense to take up learning the ABCs and proceed with it regularly as a preparation stage for learning how to read. Gained knowledge about letters is only useful for a child when it can be immediately put into practise. Letter-learning, thus, is the first step after which imminently follows learning to read.

The first rule in learning the ABCs: learn the letters one at a time!

Don’t forget that each letter is made up of spatially similar-looking elements. If you try to teach a child several letters at a time, he or she is likely to get confused. Each new letter should be introduced one by one. One learning session should include maximally one letter.

The second rule of learning the ABCs: take it slow!

Give a child enough time for each letter. Schedule 1 to 2 sessions for each new letter.

Games are a great way to learn. Children receive and process information quicker and more efficiently when it is presented in the form of a game. Show letters to a child and name them. Now you can set your imagination and that of a child free: what does a letter remind you of?

Children love competitive games and are eager to play such imaginative games as:

The “Letter Salad” Game is Perfect for Children Learning Letters

After several letters have been learned, you can play the “letter salad” game with your children. Here, the task is to find visual differences, deviations or mistakes. Below are some practical tips:

Such games develop children’s orthographic awareness and analysis skills, which are crucial for learning how to read. Children can memorise letters better and can quickly identify separate elements in each letter. Also, they learn to differentiate between visually similar-looking letters.

Games like this motivate children for further learning, rewarding them during play, which makes learning the alphabet much easier.

The Tactile Method: From Learning Letters to Reading

Each learning activity can be enriched with tactile methods in addition to the acoustic or visual ones. Learning how to read is no exception here.

A child sees a letter as something abstract. Association chains can help a lot in differentiating and learning letters. Linking each letter to something concrete or familiar helps a child to fix it in his or her memory.

While planning your session to teach letters, you will need to think of sensory activities, like painting, moulding, or forming letters out of Playdough. Having introduced the letters of the alphabet to your child, you can then go on with the following sensory activities. 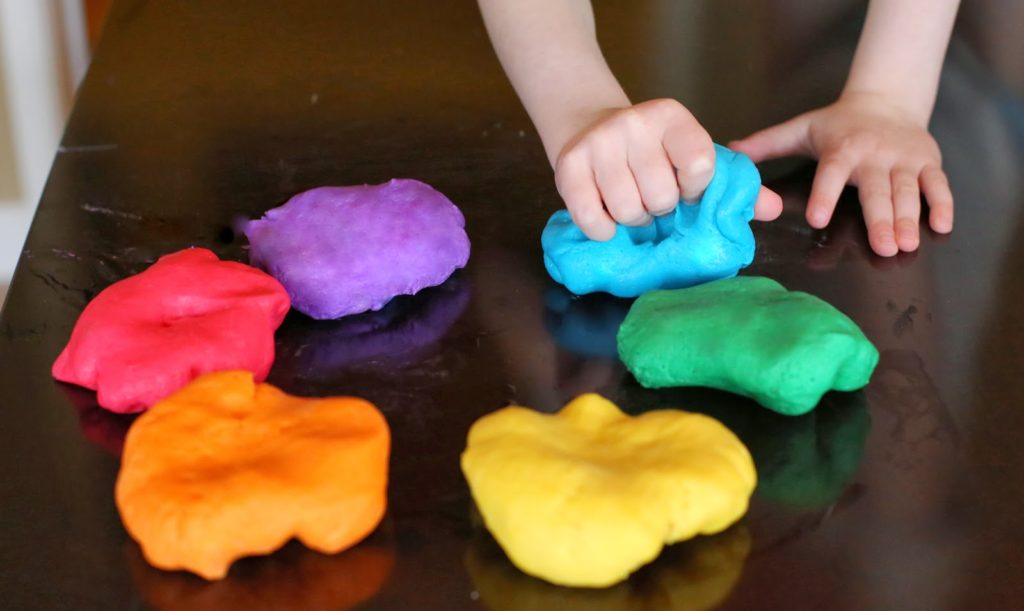 Touch a 3-D letter Outline the letters Colour or trace the letters Construct a letter from wooden sticks (tooth picks, etc.) Draw a letter in the air or in the sand Form a letter from playdough Drawing, colouring, cutting letters out of paper and glueing them together develop children’s fine motor skills. Homemade flash cards of letters facilitate memorisation and associative thinking, making a perfect basis for tactile games. You can make the cards alone or with a child. Letters can be cut out from paper of different textures and stuck to cards from carton or paper. You can then ask a child to pick a letter from 2-3 cards with closed eyes.

The ABC learning games described above help children learn letters on different levels. What is more, fine motor skills are crucial for the next important skill – writing.

Literacy begins with learning letters of the alphabet. Combining diverse perceptual learning styles is crucial here as it facilitates the process by building up systematic connections in a child’s mind and creates the basis for the next stages of reading and writing.