On Christmas Eve children are usually busy learning various songs, such as folk and celebration songs as well as stage adaptations for traditional Christmas performances. These activities are as beneficial as they are rewarding, since they help train memory, attention, artistic speech and deep breathing. Singing is a powerful tool to improve oral speech, so let’s have a closer look at this enjoyable didactic means. 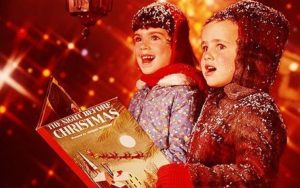 Both music and singing can serve as means to facilitate auditory attention and perception that are essential in speech understanding. While trying to follow a song’s rhythm and beat a toddler learns to pronounce words according to the tempo of a music piece. The ability to perceive the rhythmical pattern of a song is crucial to the rhythmic-intonational organization of a child’s speech. That is why it is better to begin with easy songs containing few lines and a simple but distinct and brisk melody. The younger the child, the shorter the song should be.

Singing and Development of Speech-Hearing Memory

While singing children repeat lyrics several times, encouraged by the adults/ educators. Round dancing around the Christmas fir-tree, singing accompanied with foot stamping and hand clapping are enjoyable activities for children that motivate them to repeat words and phrases without getting bored. At the same time, they actively learn words by repeating them several times in a row.

Learning new words by heart trains memory and increases its capacity, which is of great importance for further learning. That being said, the amount of lyrics should grow bit by bit. This explains why rhymes and short verses for children mostly consist of simple repetitive one-syllable words. At the same time, the learnt phrases come in useful in day-to-day communication as ready speech patterns. In this respect, songs containing dialogues with questions and answers are particularly good. 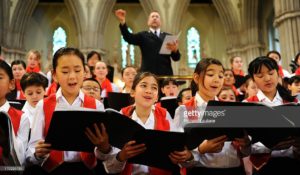 Singing helps consolidate articulation skills since it involves a clear articulation of sounds and words. Otherwise the song will be lost on the audience. Children thus have to make an extra effort pronouncing the sounds and singing through each word. The rhyme in a song makes it even more interesting for children. The ability to perceive the rhyme in a song is an important skill that can help children overcome speech problems.

Rhyme is innate in oral speech and is also related to the acquisition of reading skills. It helps children grasp the rhythmical organization of language, because they unconsciously rhyme separate syllables. They can see which words and syllables rhyme and stress them with voice or intonation.

Learning new songs helps increase vocabulary. A child can thus learn new words while singing at home or at school, by oneself or while doing choral singing. Voice modulation, change in volume can enrich the intonational patterns already used by children, adding expression to their speech. Besides, songs train visual thinking that is vital in creative use of language. 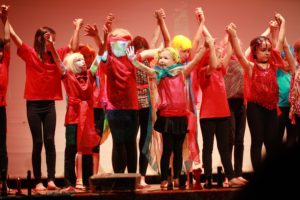 Scholars maintain that various kinds of speech pathology are often linked with dyspraxia, which means that some children have difficulty accomplishing sequences of movements, maintaining the posture, and using gestures while speaking.

Songs that involve gestures and movements are a great therapeutic medium in such cases. Songs including the following features facilitate coordination and help overcome dyspraxia:

Singing stimulates deep breathing. While learning a song, children practise diaphragmatic breathing in that they take a deep breath and use it sparingly so that it will be enough for the whole phrase. Singing is especially efficient in treatment of stuttering as it helps take a child’s mind off speaking and express thoughts without impediment in speech. For that reason, singing is incorporated into many speech therapy methods to treat stuttering.

Psychologists point to the psychotherapeutic benefits of singing – anxiety decrease, relaxation, improved ability to focus. On top of that, choral singing contributes to children’s communication skills as they learn to exchange ideas, find compromises and team work. It is important to keep in mind that a child with speech disorder can fail to understand the text, sequence of motions and do everything the other way round. Such children need additional support, visual cues or they might need to have the text repeated several times.

Which Songs Suit Your Child Best?

On Christmas Eve the most popular option is songs with dancing, folk songs, songs as part of a play or nativity narration. Encourage your kids to participate, this will help them overcome barriers in communication.

As for everyday life, lullabies and nursery rhymes, songs combined with dancing or movement sequences, or featuring narration, funny songs and ditties, emotionally loaded songs would do well.

Join your children in singing – not only on holidays – and do not think about your singing abilities! Remember that the quality of your performance depends on the belief in your own abilities!